Why Is Amsterdam Called The Venice Of The North? 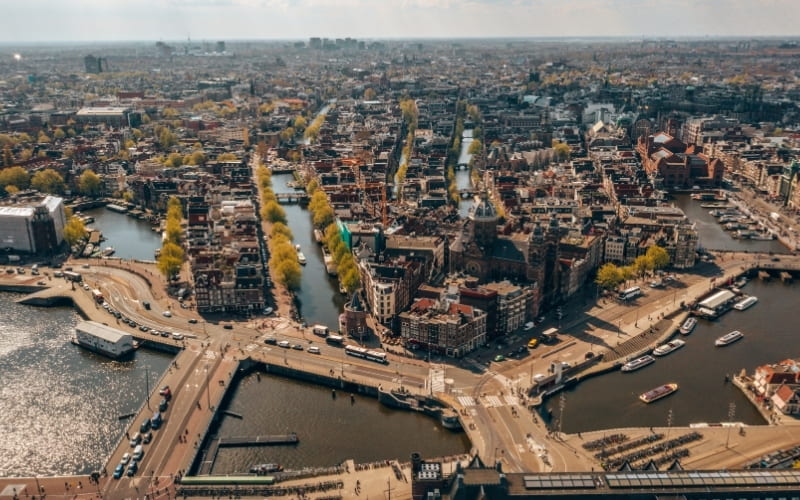 If you happen to know anything about the city of Venice, Italy, you are aware that it has winding canals all throughout it that create absolutely picturesque scenery and photography opportunities. The many canals with their iconic gondolas floating by are one of the primary features that Venice is known for, so much so that other cities in Europe are compared to this lovely place. In the Netherlands, there is also one city that is compared to Venice, but "why is Amsterdam called the Venice of the north?".

The city of Amsterdam has been coined as the Venice of the North mostly due to its network of numerous canals found throughout the city that visitors can enjoy drifting along as a fantastic way to see this place in a unique and peaceful way.

In today’s article, we will discuss everything there is to know about why Amsterdam is called the Venice of the North, the significance of the canals in Amsterdam, if there are other cities throughout Europe that have been called the Venice of the North, and whether or not the canals are the only reason for that comparison. Keep on reading to find out more about this intriguing topic.

Amsterdam The Venice of The North

Amsterdam has a wide variety of things that it is famous for, and the canals are definitely one of those things. The main reason why Amsterdam is called the Venice of the North is of course because of the many canals that both cities have.

Amsterdam is situated about 1,300 kilometers north of Venice and is located in the Northern part of Europe as well, which explains the title that has been awarded to this city.

Amsterdam, the capital of the Netherlands has been called the Venice of the North for many years now, and the canals throughout Amsterdam were dedicated as a UNESCO World Heritage Site back in 2010.

The primary canals throughout the city are called the Prinsengracht, Herengracht, and Keizersgracht. Amsterdam is split into about 90 different islands among the waterways, with over 1,500 bridges linking them all together in an intricate manner. Amsterdam has 165 canals in total, compared to the 150 canals of Venice.

Venice has about 118 islands and 400 bridges, which is another big similarity between Venice and Amsterdam.

If you have ever been to Venice or if you have seen images or videos of it, you know how significant the canals are to this city. The canals in Venice are naturally occurring, but they were expanded to allow more room for the construction of buildings and homes on the various islands.

There are no cars in Venice, but there are some footpaths. The subject of rising sea levels is a huge concern for Venice since it is so heavily surrounded by water and there is a huge dependency on the canal system.

Now there are many cars in Amsterdam in contrast to Venice, but the battle against the water is of course a problem that both cities have to deal with.

A large portion of the Netherlands is in fact below sea level, but the country has implemented advanced water management systems to ensure that flooding does not occur.

If you would like to find out a bit more regarding the intricate water management systems that keep the Netherlands from going completely underwater, check out our other blog on this topic here.

A map of Amsterdam, on which you can see all canals in the city centre:

The Canals of Amsterdam, the Venice of the North

The city of Amsterdam is connected to the North Sea via the North Sea Canal, which was created as a way for ships to get into the port. The majority of the canals that twist and turn throughout Amsterdam were constructed way back in the 1600s when the population started to grow.

Building the canals and plots of land the way it was initially done provided more opportunities for residential properties, increased security of the city, as well as an easy means of transport. The layout of Amsterdam was certainly thought out intelligently, as it aimed to make the most out of the available area and to utilize the space wisely.

The construction of the canals throughout Amsterdam allowed for the population to multiply exponentially. Some of the canals have been turned into roads as the number of residents has grown so much over the years, but a quarter of Amsterdam is still comprised of many maneuverable waterways.

There are about 75 kilometers (46 miles) of canals in Amsterdam, making it one of the cities with the most kilometers of canals. The canals used to be utilized way more widely for things such as merchandise transportation when they were first constructed, so this specific operation has indeed decreased a lot over the years.

Many travelers come from all over the world to experience countless different things about wonderful Amsterdam, and one of those things is undoubtedly the canals.

Several companies provide leisurely canal cruises, which offer an ideal way to get around and see the city from this unique perspective.

A rather large number of about 3,000 residents actually live inside of houseboats within the Amsterdam canals or rent them out to visitors, as well. Living in a houseboat used to be a symbol of poverty, though today the rental demand for them is very high.

Would you like to know more Amsterdam canals facts? Then please check out our extensive article on this topic.

Other Similarities Between Amsterdam and Venice

Amsterdam and Venice do have a huge appreciation for art, architecture, and cuisine in their own unique ways, though. Venice has numerous cultural sites, such as museums with world-renowned art, just like Amsterdam does.

The predominant reason that these two amazing cities are always compared is in fact due to the canals. As it was mentioned earlier, Amsterdam happens to have an overall smaller area than Venice, but it also has nearly 40 more miles of canals than Venice does. The population of Amsterdam is also considerably higher than in Venice, as well.

Are There Other Cities That Are Compared to Venice?

Amsterdam is known primarily for being the Venice of the North in Europe, but there are actually several other cities within this continent that have claimed this title, as well.

Many European cities do have intricate canal systems, though Venice and Amsterdam do happen to have the most. Let’s break down a list of some other cities in Europe that have significant amounts of canals, too.

Annecy is a stunning city in the French Alps that has three major canals running through it as well as large rivers and lakes surrounding this storybook town. Certain areas of historic Annecy have more waterways than roads, as well.

Birmingham is a city within the United Kingdom that has around 56 kilometers (35 miles) of canals throughout it that are enjoyed by many. Travelers can leisurely walk or bike along the waterways or enjoy a canal cruise to see a vast portion of this city.

Bruges, Belgium is not too far from Amsterdam, and it is sometimes also referred to as the Venice of the North. The various canals throughout Bruges were constructed to allow transportation of goods into the port, just like Amsterdam.

Copenhagen is known for its picturesque waterways and vibrant buildings that line them. Nyhavn is the most well-known canal district here. Canal cruises are widely popular in Copenhagen, and they are one of the very best ways to see this unreal city.

The city of Hamburg, Germany has 22 winding canals throughout it, and well over 2,000 bridges! It has been calculated that Hamburg happens to have the highest number of bridges out of any other city in all of Europe.

Saint Petersburg, Russia is often called the Paris of the East, but it does have an impressive 70 canals and rivers that crisscross this remarkable city, as well as about 400 bridges that allow for easy transport over these waterways. Some parts of this city are only reachable by boat, too.

The city of Stockholm, Sweden is actually made up of around thirty percent of water. Stockholm is comprised of 14 islands, and there are nearly 60 bridges that connect the city. This stunning region is great in the winter months if you enjoy ice skating, too.

As you can see, there are several other cities within Europe that have a large number of canals and that have sometimes been referred to as the Venice of the North. Aside from Amsterdam, Bruges is the other main city that is primarily compared to Venice most regularly.

The Netherlands may not be the biggest country in the world, but there are more unique things that this country is known for than many other places.

The canals that weave through Amsterdam are a significant part of what makes up this city and exploring them via a boat or biking along with them on a nice day is a lovely opportunity like none other.

Hopefully, you have a clear understanding "why Amsterdam is called the Venice of the North", and have learned some interesting things about the history and importance of these canals. The best way to see if the comparison of these two cities is fair is to visit and experience them for yourself.

Amsterdam, Canals, The Netherlands, Venice of the North